Initially I had made the assumption that the major components of the Omni – such as the Base Plate, Swing Arm and Mast – would not require any adjustment or modifications.

However as I progressed in trying to align my machine I came to the conclusion that I could trust nothing and set about measuring and testing each component.

The most perplexing problem was that as I swing the quill and dop across the lap, the tip of the dop would travel in an arc over the lap. And that arc would not be the same height depending on what position the swing arm was in.

I don’t have any photos to demonstrate the problem so you’ll have to visualize this with my little sketches.

After puzzling over this for a while, I tried moving the swing arm out and tested on different parts of the lap – still getting the arc but not the same amount of arc.

I realized that this indicated that the mast was not true – that depending on what direction the mast was facing, the dop and quill would move in a different arc. The sketch below will give you an idea what I’m talking about. The dop will follow the edge of the disk, so you can see how the arc the dop travels will change as the orientation of the mast changes. 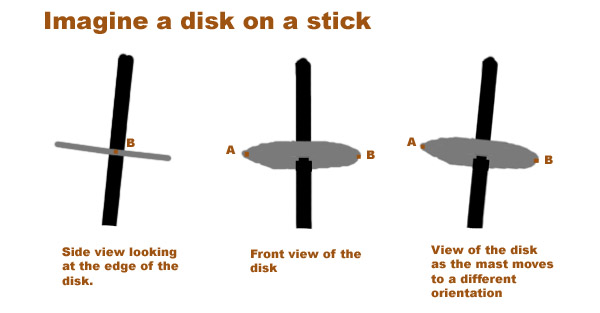 So the first thing I needed to do was Align the Mast. This was complicated significantly upon my discovery that the Base Plate is warped, leaving me nothing reliable to measure the Mast alignment against.

By the way, if your Mast is leaning the opposite way (towards the lap), the arc the dop tip traces will look like this:

This entry was posted in Mast Alignment and tagged alignment, mast, poor quality. Bookmark the permalink.