Here is another fix for the Omni-e as sent to me by another owner, Christa Starr (thanks and sorry for the delay in posting!)

In the end, it turned out that both her and my Omni-e faceting heads don’t have anything between the angle plate and the main faceting head block to keep it tight. Christa said hers has a plastic washer inside, but I just checked mine and there is nothing.

A bit of masking-tape later, her faceting head angle is now secure. She plans on changing it to proper gasket tape in the future. As for me, the masking tape works well enough so it’s going to stay for the moment.

Here’s some photos and her commentary.

I thought the encoder was broken because every time I tapped the head against the hard stop / fine angle adjustment knob the digital angle readout would change.  Everything was locked up tight, I’d even bent an allen wrench making sure the fine angle adjustment couldn’t move.  I sent Gearloose a picture of my encoder. 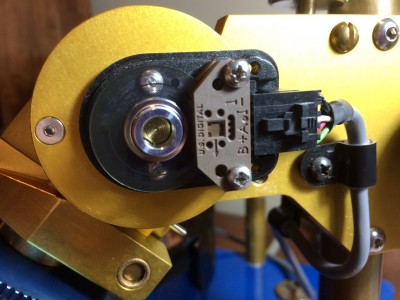 He insisted that the encoder pictured was used in cars (i.e. lasts forever) and shouldn’t be the problem.  So I took closer look and when I was tapping the quill my stone was slowly but surely marching down towards the platen, and eventually hit it even though it should’ve been locked.

So the angle readout was actually right.

I opened up the head and there was just one plastic washer inside. 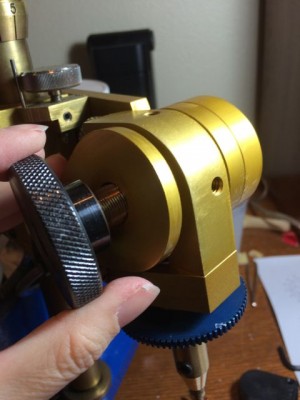 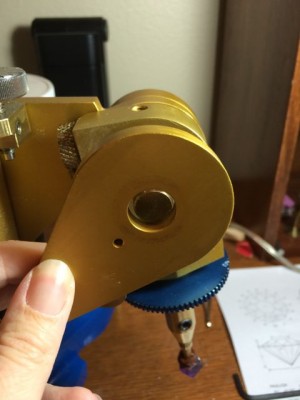 This is the plate that holds the Omni-e faceting head angle in position via friction with the main faceting head pivot block. Courtesy Christa Starr

Jon realized that the metal was sliding down because no matter how hard I tightened the set lock knob, the plate (the piece sandwiched between the set lock and the main pivot block) wasn’t held tightly enough against the pivot block to stop it from slipping.  He suggested covering the inside of the plate and the inside set lock with masking tape to increase the amount of friction between the parts. 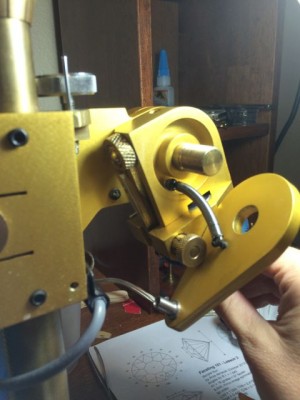 Detail of the Angle Adjustment Plate and the Faceting Head pivot block (that holds the quill). Note that there is nothing between the plate and the block to increase the friction to hold the head at the right angle. Courtesy Christa Starr 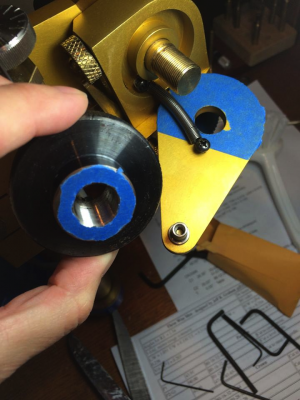 It worked.  🙂  Next step is to replace the masking tape (a hail mary hack) with actual gasket tape.