Disclaimer: performing this procedure may void your warranty. Proceed at your own risk.

Warning: this is a slow and tedious process. If you are not mechanically inclined, think wrenches can be used as hammers or have a short fuse — do not attempt to adjust the alignment yourself. You’ll probably make it worse than it was.

You probably don’t have to strip down your Omni to the point I did for this process, but you will have to remove the Omni Spindle Housing so you have access to the Base Plate.

The hardest part of aligning the Mast of the Omni is trying to find something flat to reference to. As mentioned in other posts, my Base Plate is warped and can’t be trusted to align the Mast to. The real problem was that nothing seemed to be consistent enough to use as the tie-back point where everything should line up.

I compromised by arbitrarily deciding that I wanted a flat surface (not a point) to measure the Mast alignment to. This was because I found it easier to detect and locate the worst tilt by swinging a dop over a surface, rather than watching it over a single point. Depending on your spacial skills, you may find a simpler and easier way to align your Mast than I’m outlining here.

You’re going to need your flattest lap, a 3/16″ Allen key, a 3/32″ Allen key, various pieces of shim metal (I used brass shim stock from a sample pack I bought at Lee Valley Tools), a marker and a lot of patience.

My Mast appeared to be tilting away from the lap, so that the Quill traced an arc that was higher in the center of the lap than at the edges. You can also adjust for the other situation of an inverted arc where the Quill is lower at the center by starting at the lowest point of the lap.

I took the lap (an old ceramic lap that I know is flat) and centered it on the Base Plate over the Platen Tilt Adjustment Allen Screws. I put a dop in the Quill and adjusted the angle of the Faceting Head to about 40 degrees.

I moved my Swing Arm in so the tip of the dop was at the 6 o’clock position over the lap. I tightened the Swing Arm so it wouldn’t move easily and marked it so I knew exactly where the Swing Arm was positioned. I then lowered the dop until it barely touched the edge of the lap.

I swung the Quill so the dop was now at the other edge of the lap at about 1 o’clock. In my case that edge was higher than the 6 o’clock position, so I raised the Faceting Head until the tip of the dop barely touched the lap surface.

After all that, I used the Platen Tilt Allen Screws to adjust the angle of my ceramic lap until I had the tip of the dop barely touching the surface of the lap at both the 6 o’clock and 1 o’clock positions. The tricky part is not disturbing the position of the lap after this – I ended up using a bit of tape.

In these photos you can see how I’m doing this. I’ve chosen to use a stone glued on the dop because I found I could hear the scrape of the stone on the lap better than the dop. 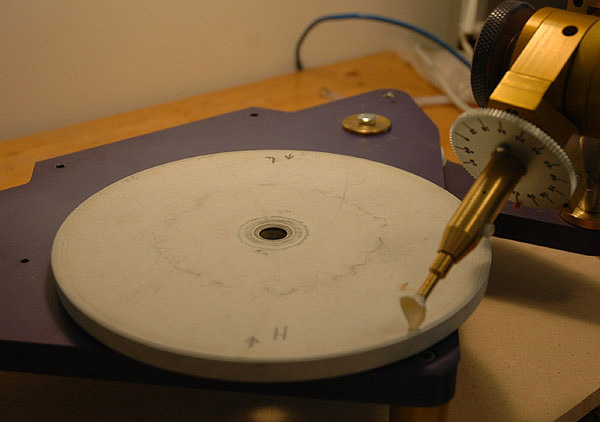 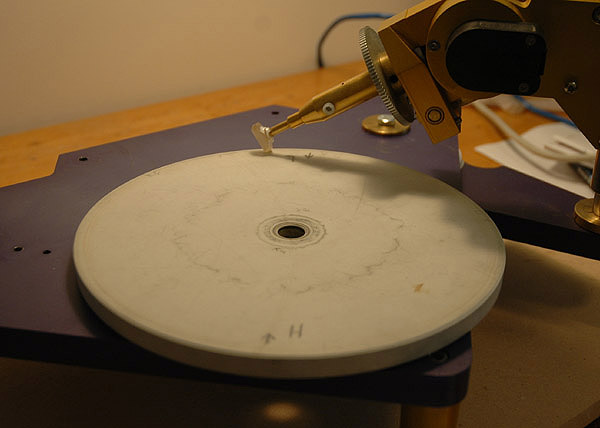 Now put a ink mark on the Mast, Mast Bushing and Swing Arm so you know where all the parts were before you started. The photo doesn’t show the mark on the Swing Arm that lines up with the marking on the far side of the Mast and Bushing. 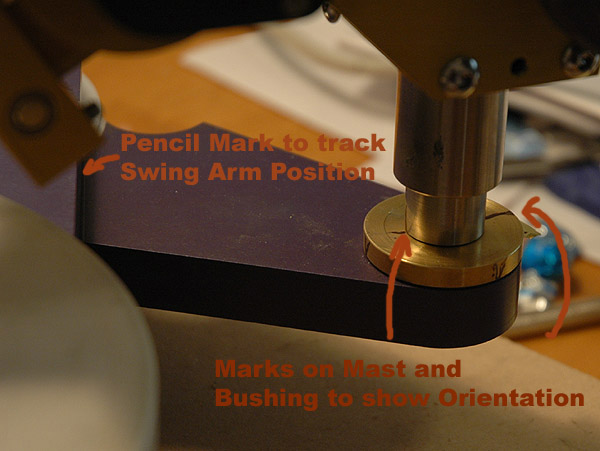 Now check the height of the tip of the dop over your lap. Is it worse or better?

Adjust the height until the dop is barely touching the lap again. Repeat these steps until you’ve made the Mast have the worst arc possible. This took me about 20 minutes of going back and forth.

Congratulations! You now know that the Mast is tilting back pretty much directly in line with the center of the lap.

Mark the Mast, Bushing and Swing Arm on the back side of the Swing Arm in line with the center hole of the lap. This tells you where you need to insert the shims.

Now you need to try to figure out how much shim metal to put under the Bushing.

Loosen the Mast Bolt and rotate the Mast and Bushing 90 degrees clockwise. Tighten the bolt. The Mast is now tilting back towards the 6 o’clock position.

Adjust the Facet Head height so that the tip of the dop just touches the surface of the lap at the 6 o’clock position. This should be pretty close to being the height the dop tip needs to be when we’re finished our adjustment.

Loosen the Mast Bolt and rotate the Mast and Bushing 90 degrees counter-clockwise so it’s back in the worst orientation. Tighten the bolt. Swing the Quill so the tip of the dop is above the 6 o’clock position on the lap. When we’re done with the adjustment, the tip should just be touching the lap.

Now cut some arrow-shaped pieces of shim metal. Adjust the Mast tilt by inserting pieces of shim so the point is touching the Mast where you’ve marked the back of the Mast and Bushing. Tighten the Mast Bolt after each additional piece and check the dop position. Once the tip of the dop is touching the lap, you’re almost done. This step took about 10 minutes. 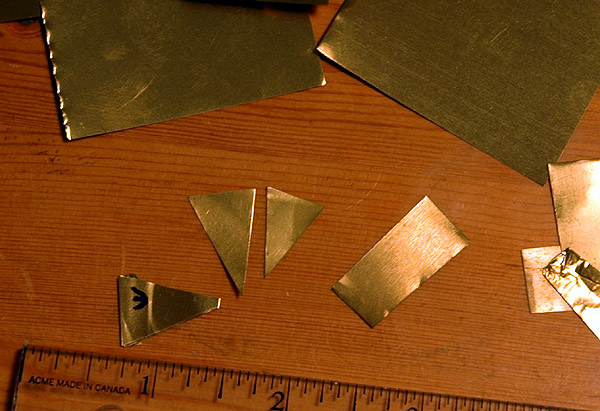 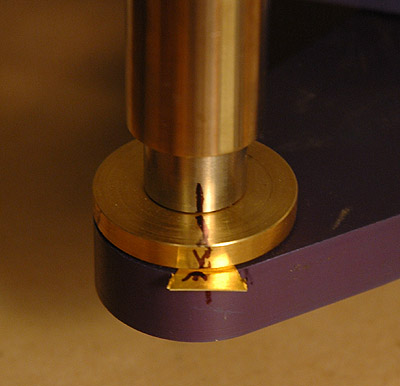 The last thing to do is a sanity-check. Loosen the Mast Bolt and turn the Mast, Bushing and shims 180 degrees. Tighten the Mast Bolt and check the height of the dop tip at the 6 o’clock position. You should be pretty close to just touching the lap. If you’ve hit it perfectly, congratulations! I wasn’t able to get it perfectly accurate but pretty darned close. If not, play around with the amount of shim you are using until you are satisfied. I spent another 5-10 minutes double-checking.

Tighten the Mast Bolt well and you’re ready to Align the Platen.

This entry was posted in Aligning the Mast and tagged alignment, mast. Bookmark the permalink.