I received my new stainless steel collet quill just before New Years and finally had a chance to install it and test it out. I received 2 quills, one of which was installed in my yoke. You can read about the problems I discovered with the original Omni faceting machine quill on my Another Frustration – Quill Runout post.

Here is a photo of the collet quill installed on my Omni. 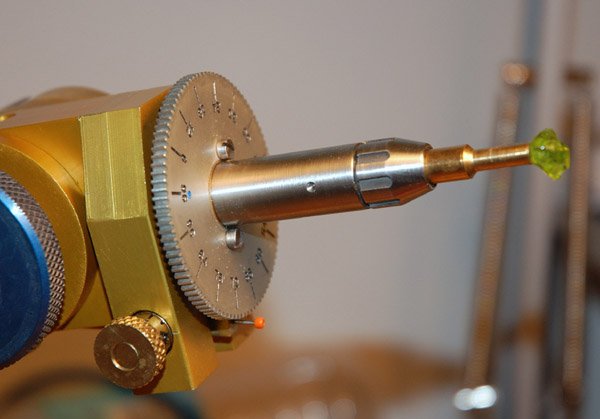 There are a few things to note:

Here are some comparison photos with the second quill. It does not have the dimples in the shaft and the collet nut is a slightly different design, but otherwise the quills are identical. 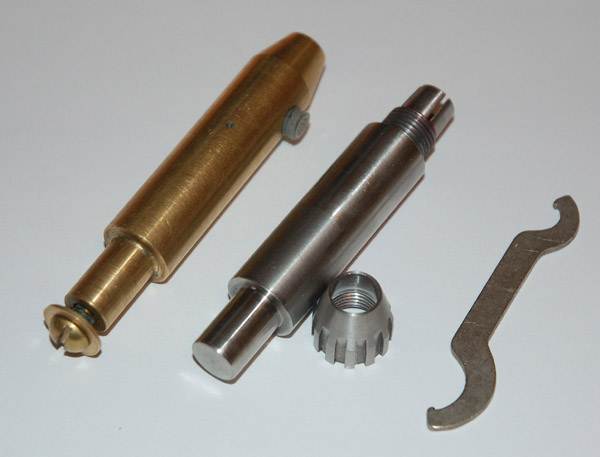 The quill has been so precisely machined to fit the quill bearings that you can’t just slide it into place. In order to get the new collet quill to fit into the Omni faceting head, you need to throw it in the freezer for 20 minutes so it contracts slightly. With a bit of light grease on the bearing races you then quickly push it into place and voila, it’s ready to use. As it warms up it forms a very tight fit into the bearings.

So of course everyone wants to know the meat of the story: how does this new collet design quill cut?

First of all – it’s 8x more accurate than the original brass Omni quill. The original quill had 0.0055″ of runout when measured at the machine shop. The new quill was measured to have under 0.0007″ runout. Now that’s getting close to what it should be. Under 0.001″ at very least.

To test it out I decided to try a cut that would have had me pulling my eyes out had I tried it on the old quill. My biggest complaint was that cutting square step cuts was a nightmare as nothing seemed to line up enough to get decent meets. This is not a surprise once I realized that the quill had an immense wobble about the dop axis. So I chose to modify Ernie Hawe’s Asscher design (from the USFG List files section) which is nothing but steps in a cut-corner square shape.

The verdict? It’s a huge improvement over the original quill. I still can’t cut to depth using the angle meter as there’s still some slop in the system somewhere which is throwing the depth off a bit, but it’s way closer than before. This stone took a total of 5 hours from dopping to completion – much less than I expected.

There was much less need to use the cheater, and the meets actually fell into place with very little tweaking! This is a first for me cutting on the Omni faceting machine – I just couldn’t get proper meets with the stock parts and crappy transfer jig. And I’ve been an Omni owner for 18 months.

I’ll let the photos speak for themselves. Here are some pictures of my test cut peridot. It has a couple of lilypad inclusions in the pavilion and crown, plus a small internal fracture. But the brilliance and play of light in the stone pretty much hides the defects. 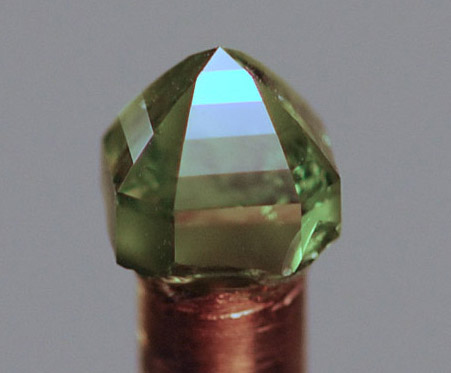 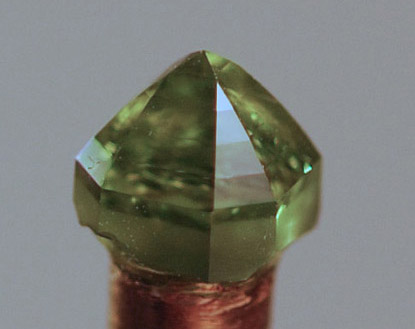 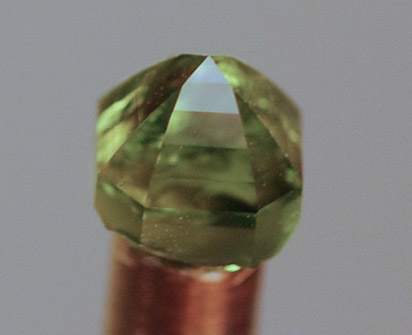 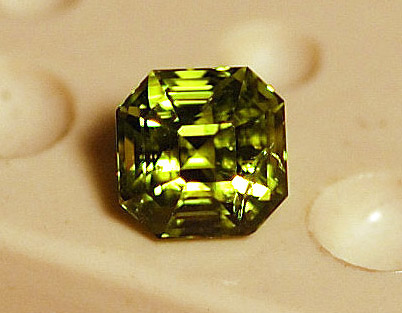 Sorry, I no longer have any of these custom collet quills left for sale and do not have any leads on where to get one machined.